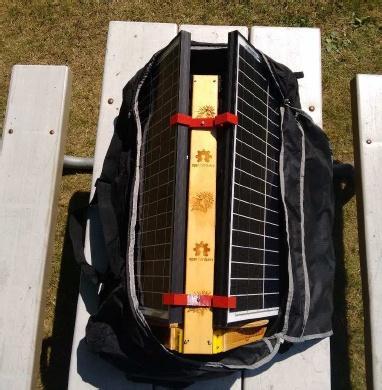 There was little doubt that 3d printing technology will revolutionize manufacturing. One of the biggest problems with 3d printing presently is due to its high purchase cost and it’s running cost. Needless to say— these printers are expensive to operate and take a lot of time to print objects.

So, plans to dole out the machines to a large segment of the society is often met with disappointment. They are either unable to buy it or unable to spend enough on keeping it running. Developing countries and communities are missing out on all the good that could have been achieved with the technology due to the high costs.

That’s all set to change courtesy of engineering students.

Students from Rochester Institute of Technology (RIT) are working on a solution to bring a mass-market solution that attempts to salvage some of the costs. In this attempt they have combined solar power with 3d printers to provide additive manufacturing access in Columbia.

The system takes its power from the sun and connects to a FFF printer and can also work with electrical power. In regions like Columbia where power outages are the norm the solution is well equipped to handle outages.

The system can easily switch between AC power provided by an outlet and dc power from solar chargers. The team is also behind the wheels on other mass market project, converting plastic bottles and waste plastic to filaments that can be used in printers. If you don’t know most 3d pens and printers employ ABS filament which is the same material legos are made of and plastic bottles can be recycled to make filaments to be used in printer cartridges.

Societal conditions are hard in these regions with little access to water and electricity. At the same time the problems caused to plastic looms large every day.

The students’ honest attempts at solving the crisis is bearing fruit.

We have seen Solar powered 3d printing making manufacturing accessible to communities. Let’s go through another example too.

There were instances during the Nepal earthquake when the whole region was bereft of electricity and many devices were powered with car batteries. That said such contraptions can only last so long before running out of juice.

Solar power on the other hand is one of the best alternative sources of energy that can be harnessed anywhere. The Michigan Tech Open Sustainability Technology Lab (MOST) developed a compact solar powered printer that can be carried easily across places and operate in relief areas.

It’s called the delta RepRap printer and is based on open source technology meaning anyone can be access the schematics and blueprints and create one for himself.

The best thing is this device works even at low light conditions and can power a single battery which in turn can run the printer consistently.

So if the sunlight’s low the battery takes over the operation automatically and provides enough power to run the device. The battery switches off automatically when sunlight is high enough and charges itself.

Extensive testing under varied outdoor conditions revealed that it could work in low sunlight and also zero sunlight.

Battery can run the device for up to 7 hours- enough to last the night. Use of a single battery makes it easy to operate and less expensive.

So what do you think of the advances in 3d printing that are being used to change lives around us?

Solar operated printers can save lives and generate much needed aid when relief operations are still underway thus enabling us to save hundreds of more lives.